In the late 1990s, early 2000s the GTA was divided into unofficial zones by the towing operators in the area. Was it for elections or census purposes? No – not quite. The reason for the division of turf was for tow truck drivers so they know exactly which areas of the city they are allowed to pick up vehicles in. The GTA encompasses such a large amount of people that the need for tow truck drivers is almost unprecedented in other areas of Ontario. The fact that this area has such a high need creates competition amongst drivers to make sure they remain profitable and soak up as much of the business as possible.

In the towing business, the most profitable tows for drivers are accident tows as the rates are mandated by the government so the drivers are paid a premium for towing from an accident scene. This means that the drivers in the GTA are fighting to be the first on scene for as many accidents as possible. In addition to picking up more vehicles and being the first on scene to as many accidents as possible, tow truck companies are pulling some fast ones on customers and their insurance companies. Not only are the drivers using every tactic in the book to persuade drivers to let them take their vehicle, but they are receiving bonuses or other incentives for recommending certain post-accident services. These recommendations can be for repair shops, massage therapy for injuries sustained in the accident or even lawyers for filing lawsuits.

This drive to obtain business isn’t just some friendly competition anymore, though. In Toronto, those who work in or are involved in the towing industry are starting to worry about their safety while on the job. Certain towing companies have taken extreme measures to make sure that other towers do not try to interfere with their turf, even if it means outright threats or even violence.

Some drivers who take their work trucks home with them have woken up in the middle of the night to find that their tow truck has been lit on fire, sending a message that they should not be heading in to work anymore. Further, two men have been shot and killed over feuds that started with towing disagreements – one of them execution style. Since the GTA has been split up into zones some drivers feel as though they are limited in the amount of business they can pick up, and they feel that a message needs to be sent when someone infringes on their already small territory. Sometimes that message is sent with a baseball bat, or even a gun, other times trucks are lit on fire as way to stop other drivers and their associates from working.

One towing industry associate was Carr Law Firm. This law firm often represented insurance companies who were suing towing companies for fraudulent charges or excessively high rates. The towing companies have many connections, so they often resorted to scare tactics such as mugging the lawyers or setting the office on fire. After a number of years, with numerous threats and incidents Carr Law Firm decided to permanently shut its doors.

There have been numerous investigations into the towing industry to determine why it’s so susceptible to criminal activity. Many owners of towing companies will openly admit to having ties and connections with mafia, organized crime and even gangs. These connections help to ensure protection for their business by making sure no other owners move in on their territory. If they try to, a clear message will be sent. These towing company owners are treating the GTA the same way drug dealers carve up street corner turf.

Why can’t they be charged with crimes, then? There are penalties in place for towing companies if they are caught or found to be responsible for committing any of these acts but there isn’t much deterring them from doing it again. The company itself is penalized, and will be forced to shut down however there’s nothing stopping them from opening another towing company the very next day under another name. There aren’t any long term, real consequences for the owners of these companies as long as they have the capital to just open another business.

In speaking with seasoned tow truck drivers, there is genuine concern for the future of the industry. Joey Gagne, the president of Abrams Towing, says that if anyone out there is really watching what is happening in this industry he doesn’t blame them for not wanting to get involved. Who would want to work in a profession where you could be jumped and seriously injured for just showing up to do your job? He believes this kind of violence and criminal activity will scare away those people who genuinely want to get into the towing business, and are running a legitimate business. He also commented that he’s seeing a decline in their ability to recruit good, reliable drivers with all this going on. 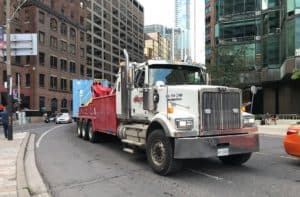 This kind of violence seems to center around accident towing since that is where drivers have the most money to make in this industry. It’s an incredibly lucrative side of towing, and is regulated by the government with higher rates than regular towing. Some companies – like Abrams – focus on contract and auto club work so that they can keep away from the violence. This focus doesn’t mean, though, that they haven’t been threatened or had trucks set on fire.

Drivers and administrators in this industry are calling for tougher rules and licensing so that there won’t be just anyone driving a tow truck. Many would also like to see strict background checks to make sure that drivers are pre-screened and not known to be involved in criminal activity.